It all started in back in June 2019, when I suddenly collapsed at my school while I was running in the corridor. I wanted to make a sharp turn, but I could no longer feel my legs and then I bumped my head against the window. The teacher called my father and we went straight to the doctor. The doctor could not see anything and the blood test was negative. My father was nevertheless alerted to keep an eye on things. ”If it happened again, it might be neurological” the doctor said and that it could be “epileptic”. So it seemed innocent at first, but soon it turned out not to be. 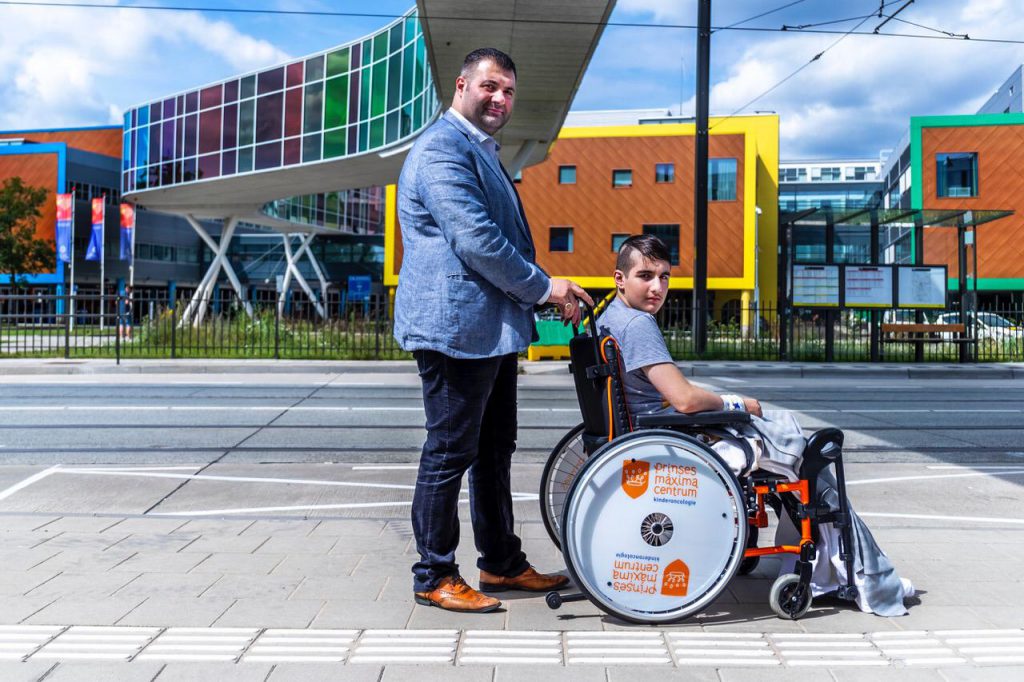 I’m in the middle of puberty and have grown a lot lately. My parents and doctor attributed all the symptoms and complaints that I had to the physical changes that a young boy at puberty experiences during the growth. I had become less powerful and my speech was deteriorating. Walking was difficult, but that could have been due to the fact that I had flat feet and my bones that could not keep up with the growth. The difficulty in talking may have to do with my voice undergoing a change because of puberty. After all, nobody immediately thought of something serious as no parent would like to think about this at first

The summer vacation had begun and my parents thought that a short vacation with our family would do me good. We had decided to visit our family in Germany. I have uncles and aunts there and many nephews and nieces. The entire trip to Hamburg, four hours in the car, was very tiring for me. I was sleepy during the entire trip. It must have had to do with the warm weather, my parents thought. This continued upon arrival and some family members pointed out to my parents that my ‘state’ was not normal and that I should see a doctor. They briefly discussed whether I should visit a doctor in Germany or whether it was better that we immediately return to the Netherlands. After a few phone calls with the health insurance alarm line, it was decided to go back home. Should I have a serious problem I would rather be in my own country than somewhere abroad which could complicate things such as insurance even further. Tens of kilometers before arrival, my father called the General Practice Service, after which we could report directly to the Service that is located inside the first aid department of Rijnstate Hospital in Arnhem. After I was thoroughly examined by the doctor on duty, I was referred to a pediatrician. She also did some tests after which she suggested to do a CT-scan. The wait was long, and after a CT-scan was made the annoying news was announced. There was something in the brainstem that didn’t belong there. Immediately I was transported with an ambulance to the Princess Maxima Center for Pediatric Oncology in Utrecht. That evening we were informed that I had a brain tumor in the brainstem. The following day an MRI was taken to officially confirm it; a rare brain tumor with mutation H3K27M, diffuse intrinsic pontine glioma (DIPG). The tumor is spread in the brainstem, fast growing, malignant and very aggressive. The growth could be temporarily stopped with medication and radiation. Surgically this tumor cannot be removed because it is in a very delicate place and the tumor is spread between healthy cells. Only radiotherapy and a very limited number of expensive and hard-to-obtain medicines as well as some very expensive treatments abroad can be beneficial for my healing.

I need your help in this area! This is not something we can overcome alone. A lot of money is needed to pay for these treatments. Unfortunately, the health insurance does not reimburse these costs.

At our request, our doctor shortly after diagnosis looked for opportunities abroad and recommended treatment within a study at the Clinica Universidad de Navarra in Pamplona, Spain. I started a so-called “oncolytic virotherapy” here. A virus was surgically injected into the tumor in Spain. A major intervention that I could only recover from after a few weeks of rest. Then I had to come back to Spain every month for follow-up treatments and checks. I made the last visit in October and for now I don’t have to return. In the meantime, I have had a total of 13 radiotherapy sessions at the UMC in Utrecht for three and a half weeks and I still get a cure from my PMC doctor in Utrecht once a month. We also went to Istanbul for a 2nd Opinion where we approached and visited the clinic of Dr. Mehmet Özek and a delegation of Cuban oncologists at Okan University. Fortunately, we are now at a stage where the tumor has become smaller in size and volume. However, it is now time to prevent the tumor from becoming immune to current treatments and growing again. That is why we have to go abroad again for my treatment. Unfortunately there is only a very limited number of institutions that can mean something for my disease. The United States offers a promising drug within a trial and England, Switzerland and Mexico all offer options for various treatments. It still has to be determined which treatment suits me best and whether they will have me or not as some clinics only accept a few patients. Perhaps a combination is possible, but we are figuring that out also. The only thing that we can be certain about is that it will be very expensive. And since this disease doesn’t have an official cure, a lot of treatments are experimental which means less support from the government which also leads to high prices . The costs will probably be hundreds of thousands of euros.

I need your help to fight this battle! Don’t let these financial obstacles stand in my way!
Support me in my fight against this annoying disease!
Help me overcome this!
I count on you!
Love, Ömer…